WHY DID I GIVE UP COFFEE?

It’s always rare when you find someone who isn’t a coffee drinker, especially those in their twenties. Not only is it a social thing, it’s something that so many people depend on to get through their day. Recently finishing four years of college, I especially saw this in myself during my time in school. I truly felt like I would need to drink coffee every day that I wanted to be even a little bit productive. But, something began to throw off my seriously committed relationship with coffee and all of its forms: my stomach began to get even more sensitive than ever before (I’ve always had a pretty sensitive stomach) during my junior year of college. As my close friends know, I suffer from terrible acid reflux that gives me sharp stomach pains and simply does NOT feel good. It’s in my genetics and began to really affect my life during that year. Over-caffeination and coffee were definitely adding to the problem. I started to drink less coffee, especially when I didn’t eat anything before it, but was still averaging a cup a day. Even though coffee often felt straight up wrong to put into my body once my acid reflux worsened, I would still drink it because I was convinced there was no other way to be awake and productive.

Once senior year rolled around, I was back to two or three cups a day, dealing with an insanely busy schedule and a less than perfect lifestyle. I was still feeling pain when I drank coffee, but was able to ignore it, thinking it was worth it. When I graduated in May I continued with my coffee drinking as I started working again (getting free coffee at work makes it even harder to resist). But this whole time… I knew I would feel so much better if I could just quit! Finally, in August I got a bad virus and couldn’t eat or drink pretty much anything for a few days. This was my first stretch without coffee in a long, long time. I felt like it was my kickoff and decided right there to quit drinking coffee altogether. Bold Move.

When I shared that I had given up coffee on my page about two weeks ago, I was surprised by how many people it resonated with. I honestly thought it was rare to have a want or need to give it up. Many people messaged me asking about how I did it, what it was like to wake up without it, what I drink instead, etc. While some mentioned stomach issues as well, others just wanted to give it up for financial reasons. For some, they simply had a desire to ditch the addiction that so many of us have. So to answer some of those questions, here’s everything you need to know:

WHAT ARE THE NEGATIVES OF CONSISTENT COFFEE DRINKING?

Regardless of how my own body was feeling as a result of coffee drinking, I wanted to research what coffee was actually doing to my body. I had some information that I previously knew clarified, like how it interferes with a natural sleep schedule, especially if drinken later in the day. Also, that dependence and withdrawals are a very real thing that results from changes in our brains after consistently drinking it. Despite what I had previously thought, there are actually no known health benefits of coffee that have been confirmed by doctors. So, even if it isn’t bad for you in a nutritional sense, it’s also not adding anything. Overall, the biggest negative for me was reading about how the more coffee you drink on a daily basis, the more you will need to drink over time to feel the same alertness. As your body gets used to the daily intake, it requires more and more.

By stopping my coffee drinking habit without weaning off of it, I knew I was going to feel some of those withdrawls I mentioned before. It was difficult, but not impossible. The way I made it work was by switching out my daily cup of coffee for a matcha latte (more on this in a second) that I make at home every morning. I started drinking matcha at the same time I would normally drink coffee, and when I really needed it, a second time during the day (as I would with coffee). By keeping my routine and just making a simple switch, it felt a lot easier. Another thing that helped me was telling my family and friends that I spend time with that I was giving up the drink, so that I was defining my commitment and had other people to hold me accountable. Even at work, where I get it for free, I told my coworkers. This way, it would be harder for me to grab a cup. Ultimately, it’s been all about mindset. I know that I’m able to function without coffee, so I need to prove to myself that I can. It’s not that deep! Plus, we always have Advil for a headache…

If you’ve been following me for a while you probably know I’m a huge matcha fan. I first discovered my love for it about two years ago, but thought it wasn’t realistic to drink often because it can be so expensive at coffee shops and grocery stores. Meanwhile, I was making a trip to a coffee shop at least four to five times a week AND making coffee at home… a very expensive habit. Well, I was able to crack the code to consistent matcha drinking when I realized I could order it in bulk from Amazon or even get it from stores like Homegoods and TJ Maxx.

But what exactly is matcha? For starters, matcha DOES contain caffeine, just less than a cup of coffee. In a half teaspoon of matcha (the amount I drink) there are 15 grams of caffeine, and in a cup of coffee there are 100 grams. This switch to a much lower amount of caffeine has reduced jittery feelings, stomach aches, crashes throughout the day, and sleep issues.

Matcha is made from green tea leaves and ground into a fine powder. It’s a widely popular superfood that is most definitely worth the hype. A serving has 137 times more antioxidants than you would get from regular green tea, which means it aids in cell protection and overall health. Matcha is also great for your metabolism, energy level, and stress level. It can increase calorie burning in your body throughout the day when you start off with a serving. While the larger amount of caffeine in coffee can cause crashes, matcha actually helps sustain energy throughout the day and has been shown to increase alertness. L-theanine, an amino acid in matcha, helps reduce stress and calm the mind by regulating your mood and concentration. Studies have also shown matcha to lower LDL (“bad cholesterol”) and reduce inflammation. Finally, matcha is packed with catechins which fight cancer, and chlorophyll which detoxes chemicals in the body.

Now after reading this post, you might understand why I decided to ditch coffee for matcha. I’ve learned all of this information from publications on the web and from nutritionists and dieticians that I follow, so you can definitely find lots more information if you’re interested in introducing matcha into your diet. If you love your coffee, you can still incorporate matcha along with coffee! Just be careful about over-caffeination. This post reflects my own experience with coffee and its effects, as well as my own experience with regular matcha drinking, but everyone is different. I hope you learned something from this post and are more convinced to try out matcha!

p.s. Be careful when ordering matcha from coffee shops and cafes; there is often added sugar that they don’t advertise (like at Starbucks). To be safe, just ask: “what’s in your matcha blend?” or “is your matcha unsweetened?” If you’re wondering how I drink it, I mix 1 cup of hot water with 1/2 tsp of matcha and 1/4 tsp of cinnamon, then add 1/2 cup of almond milk!

I hope these tips help you get closer to a healthy lifestyle on a budget! As always, these are only my personal recommendations, and are the strategies that have worked best for me. Please reply with any questions, and follow along @goood_eaats on Instagram for more helpful tips and recipes!

Hello Foodies! Looking for healthy alternatives and food that your body will thank you for? Look no further. Use the navigation panel to find recipes, blog posts, and other tips & tricks for changing your lifestyle. Click follow below to be notified when I post something new! View all posts by jennlueke

This site uses Akismet to reduce spam. Learn how your comment data is processed. 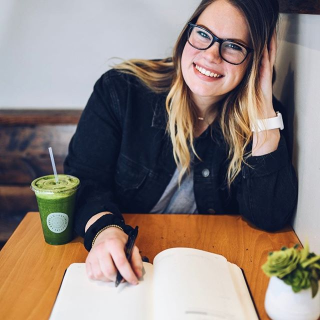 Hello Foodies! Looking for healthy alternatives and food that your body will thank you for? Look no further. Use the navigation panel to find recipes, blog posts, and other tips & tricks for changing your lifestyle. Click follow below to be notified when I post something new!